It rained last night at the campground.  I stayed fairly dry except I put my shoes outside under the flap thinking they would stay dry.  They didn’t.  Surprisingly the socks I am wearing kept the coldness away from my feet even though they were wet.  Taking down the tent in the rain was a trick.  I just rolled the whole thing up in a bag, wet and all and tied them to the top of the backpack that I was sending on the way to my next destination.  I’d worry about the consequences at my next destination.

100% chance of rain today and it was almost 100% chance 100% of the time, except for a few nice breaks.  The first half of the trail to Crianlarich was full of mud bogs, moving water, and slippery stones.  It was great.  The path was through meadows surrounded by rolling hills, pastures, rivers and streams.  I didn’t fall once today but there were mud bogs throughout the trail and I hit most of them.  Some of the trail was actually occupied by a small stream running in the opposite direction.  Wherever I could, I stepped from rock to rock through the puddle or around if there was a way (which usually there wasn’t).  The scenery was beautiful but different from most of the way up til this leg.  I had left behind for a time forests, rocky paths, the lake, the ferns and moss.  It’s what makes a trip like this so worth it.  The trail is different every day, and the weather every minute of the day.  I am walking long days alone but it is somehow spiritual.  I don’t really think about much except the scenery or the next step in front of me or whether I am thirsty  or hungry.  It is so different from a normal day.  Most of the other hikers are couples or in bigger groups (probably 80% German).  I visit when I meet up with them and enjoy the talk but there are no expectations of walking together.  I think most are on the same mission: experience a little nature.

After following the river Falloch for a time, I got to the sign for Crianlarich, which has mainly  a train station and a few stores, and was a little disappointed that I had to walk another half mile out of the way down a hill to the village.  I saw in my book that there is a tea and light meal shop at the station so I decided to do it.  It was not like I had anything else to do except walk another 6 miles to the next town.  It was a good place to dry out a little and take my shoes off while I had vegetable soup (mostly asparagus which was really good – and hot), a roll, an espresso that looked like it was served in a ceramic thimble and a diet coke.  It gave me the energy to climb back up the hill to get on the trail.  I listened to a couple of old bicyclists that were talking about routes they had taken.  They had just met.  They were talking about biking 50-75 miles a day.  That certainly is another way to get exercise but after seeing the speed of the drivers and how they particularly like the edge of the road I think I would find another way to exercise.

The rest of the trail took me through a large conifer plantation on the high side of a mountain looking down on a strath (wide valley with a river), then along the river Fillan.  The path was not as muddy.  The rain decided to shift from straight down to sideways for awhile which was unfortunate.  More beautiful scenery, uncountable numbers  of sheep, and lots of cattle, both of which shared the path with me.  I stopped at By the Way hostel and campground that has cabins, some hobbit houses (see pic when I get it uploaded), camping and large bunkrooms.  I was fortunate to get a cabin to myself for 25 pounds.  I put my wet clothes in a drying room set up for that purpose, took a shower (I had been taking showers so that there was one clean part of the day).

I had haddock and chips and mashed peas at the Real Food Café a short distance away.  Haddock is the white fish of choice or necessity when ordering fish and chips although I noticed they had cod.  I figured that I might as well have what Scots have as long as I am here.  I noticed that some of the customers there had not figured out the routine: in most pubs and small restaurants no one waits on you and no one tells you they don’t wait on you.  They wait for you to finally figure it out.  They will always outwait you (no pun intended).  Being the grizzled old Scottish trekker that I now am, I now tell them they must order at the counter when I see frustration or dismay on their faces.

20 mile day tomorrow.  That should be interesting.

My poles.  Couldn’t do it without them.

Asparagus soup at the Rail cafe 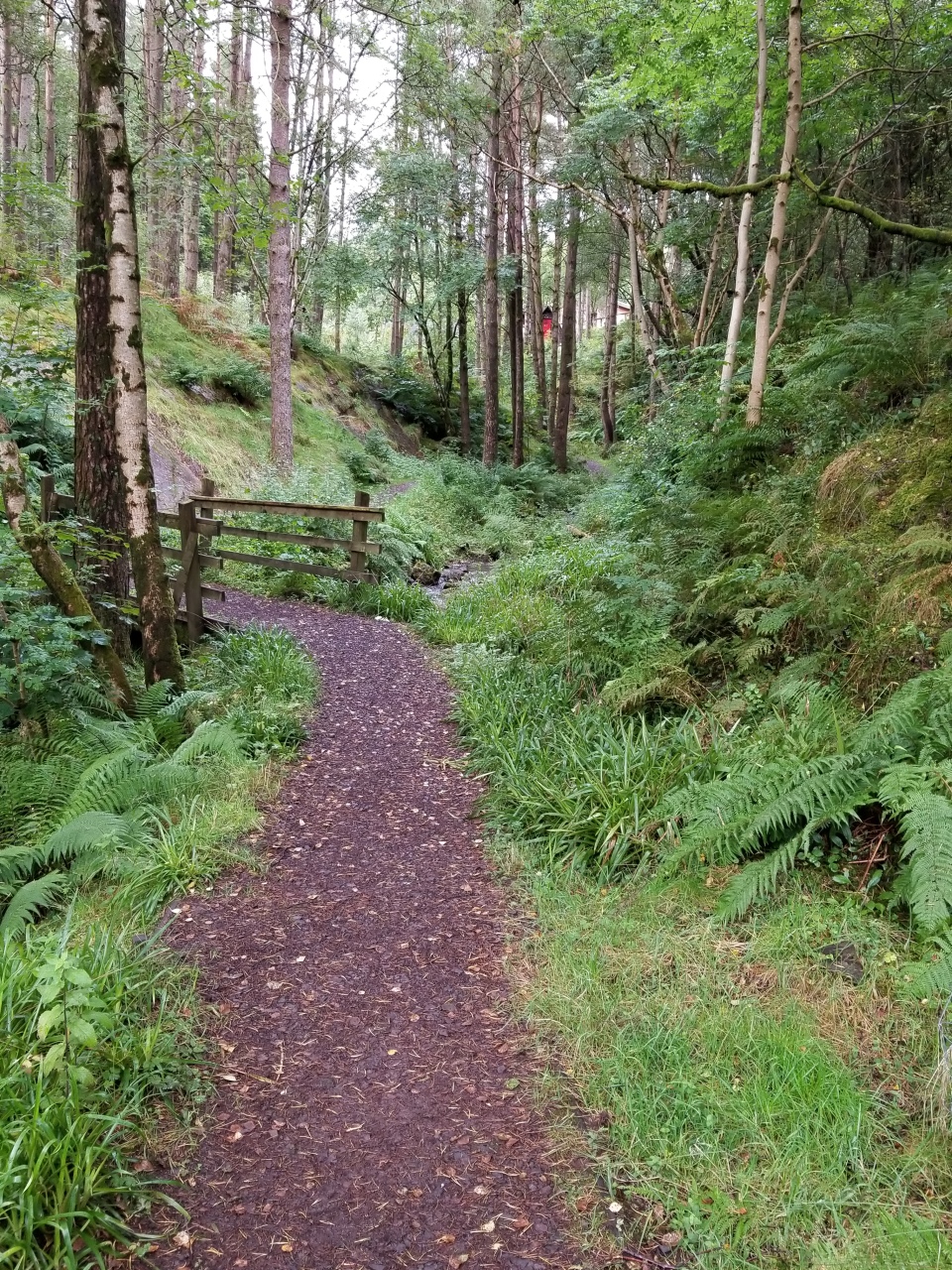