I have been known to lose my balance just standing.  In fact I did that once yesterday.  It has obviously never been fatal.  So, I really wasn’t sure how this whole trip was going to go.  There is quite a bit of movement involved.  I have probably stumbled hundreds of times but that is just what I do get from one place to another.  I forget sometimes to lift my feet when approaching any object higher than the ground. So the trail was a large feet for me (pun and misspelling intended)

I bagged the highest Munro in the UK yesterday: Ben Nevis.  A Munro is defined as any mountain (or hill if you prefer) that is over 3000 feet high.  It also has to be a well-defined mountain.  If two mountains share the same base the larger one gets to be Ben and the other one, overshadowed literally and figuratively, doesn’t.  There’s a lot of thought that goes into which is a Munro and which isn’t.  Controversy too.  But no argument about Ben Nevis.  It is 4006 feet high which really isn’t that tall by Cascades standards.  But you have to work with what you have.   It’s a 10.2 mile round trip hike.

I got up early and found a cab that took me to the Ben Nevis Hostel.  Ron, the driver, told me the best place to start was the youth hostel rather than the Ben Nevis Visitor Center so he dropped me off there.  He also gave me valuable information for the end of my hike.  He said at the intersection coming down, go straight rather than taking a left to go back to the hostel.  It ends at the Ben Nevis Inn which is really a pub and restaurant.  The ritual is to climb the mountain and then have a “wee dram” after.  I looked it up: a wee dram is 1/8 of an ounce which isn’t very much but  enough for a Scot to wet his lips after a hard day.  For most I have seen, that is just the first nip before a lot more.  Anyway,  l started up at 6.05 am which was first light.  I don’t like wasting a perfectly good morning.  There were probably a dozen hikers assembling, mostly in one large group.  I began the ascent and the first mile was almost like a staircase with large flat rocks for steps, probably laid by the military hundreds of years ago.  It was a persistently steep stairs but I trained for it on Icicle Ridge so not too big a challenge.  The sky was clear and the scenery wonderful as I rose higher over the valley.

I saw a few people coming down that had started at 1:00 am for whatever reason.  Hopefully they had headlamps.  After a while, the flat, organized stones shapeshifted into random rock fields.  My breathing was good and my legs felt strong so I kept a pretty good pace.  The poles, as usual, were life savers.  I have heard that they take about 15% of the weight off of your legs when climbing and also take a lot of the stress off of your knees when going downhill.  I believe it.  There were some large steps that would have been very difficult without the stability and leverage of the poles.  They adjust so that I keep them short going up and long going down.

It got consistently colder as I ascended.  I wore just a base layer shirt for half of it, then put on a mid layer shirt and towards the top put on my jacket and gloves.  I knew I would need gloves sometime and this was it.  For most of the walk I was on my own although there were hikers in front and in back of me and occasionally one walking or even running by.  As I approached what I thought was the top it started getting foggy and much colder.  The trail was well-marked with large cairns along the path.  A cairn is a pile of rocks.  You may have seen them on the side of a road or elsewhere which someone or several people have built for fun.  The cairns you see when hiking are serious business.  During whiteout conditions during the winter or really socked in fog, those may be your only guide to prevent you from losing the trail and possibly falling off a precipice.  I was in no danger this day because, though foggy, I could see the path and surroundings.  It took a long time to get to the official top of the mountain which is at a monument of sorts and several broken up stone walls.  There used to be an observatory on top of the mountain until 1904.  It took them quite awhile to figure out that you can see from the top only 60 days a year.  The forecast the day before was promising very good visibility but it was not to be.

I got to the top in 2 hours 48 minutes.  I was happy about that because the brochures said that the hike takes between 6 and 10 hours and I was under that.  I hung around on top for 45 minutes waiting for the fog to lift and watching as one group after another got to the spot and cheered that they had made it.  Many groups represented charities.  I saw MS, Cancer, Alzheimer’s, Heart and several others.  It was eerie as I watched them appear in the fog, move around and then disappear.  When I first got to the monument, there were a dozen people and then they left and there was a period of 10 minutes of total silence.  I was by myself on the top.  And eerie and cool feeling at the same time.  I could see the precipices that went steeply down into the fog.  It was well below freezing but I was well dressed for it.  Still my teeth chattered and I shivered.  I could hear ice crystals falling on the back of my jacket and see them form on the front.  A puddle of water was frozen next to me.

I started my descent when I realized the fog was not going to lift any time soon.  Going up is harder but going down is far more dangerous.  Here’s where the poles do their best work.  In parts it was slippery with the water on the rocks.  I slipped several times but nothing serious.  At one point I did slip and fell on my backside and a number of people immediately asked if I was alright.  I was.  I explained to them that I practice this and they laughed.  Everyone else was having trouble too.  I met a couple on the way down.  The man, probably older than me, said he had just completed climbing all of the Munros (almost 300 of them).  I was impressed.  Not may people have done that.  Several hikers were doing the 3 peak challenge today.  The goal is to hike 3 specific peaks within 24 hours: Ben Nevis, a mountain in Wales and one other one.  Not only is the climbing difficult but getting to the next destination is also a big problem.  They are not exactly close together.  As I was coming down, I could see the line of people, looking like a march of ants, coming up the trail.  I was wise to start early.  Hundreds of hikers a day climb, or attempt to climb, Ben Nevis.  I heard an estimate of 150,000 people a year in fact.

As has been my luck throughout this trip, about a mile before the end of the trail I saw a man running up the trail with a number on his shirt, then another, then another, then what turned out to be about 600 others.  It was the annual Ben Nevis race.  They start from a park in town, walk or run up the mountain and down and back to the park.  The elation I had from climbing the mountain was slightly diminished after witnessing this.  There were plenty of older people as well.  All the runners were breathing heavy and some looked exhausted and they had barely begun, but most of them would make it.  I waited for about 15 minutes for all of them to pass.  Jimmy Wild, a local doctor won it for the 9th year in a row in 1 hour and 24 minutes (half the time it took me to climb to the top), if you are interested.

On the way down, I saw an intriguing elongated hill rising above the path.  I still had some energy so I decided to climb it to see if I could get a different view of the town, which I did.  The hill was mainly short grass, moss, and weeds with some small streams all around but easy to navigate.  There were stone fields at the top.  I got to the first top and then just followed the contour of the hill to the next one and then the final one over the town.  Beautiful and different views.

At the bottom I found the Ben Nevis Inn and asked the bartender what to drink after bagging a Munro.  He said that he doesn’t serve Americans.  Next.  Some other Scots around him started joking with me.  Then he served me a Ben Nevis rum.  The Ben Nevis distillery is in Fort William so it is a popular spirit.  I ordered  bbq pork on ciabatta roll which was very good.  I sat next to Daphne, a 75 year old local, and her sister and some other relatives.  We talked about various things and she ordered haggis.  She asked me if I had had haggis yet.  I said that I have not.  She said that before I go she wanted to put a weebit on my plate to see if I like it.  She said that it was an acquired taste.  So I tried it.  Haggis consists of heart and brains and whatever else is left over after removing all of what most Americans would consider the edible parts.  I have to admit I liked it.  It is prepared many different ways but this was in whiskey and some kind of crumbs and sauce.  I will have to try some more to see if this was just a fluke. I saw Jimmy Wild run by as I was leaving the Inn.

I walked the two miles into town, flopped on the bed (cot) at the B & B and slept for an hour.  Then I went to town and had dinner (not haggis) at the Ben Nevis Restaurant and Jacobite Lounge.  I went home and slept really solid for the first time on this trip. 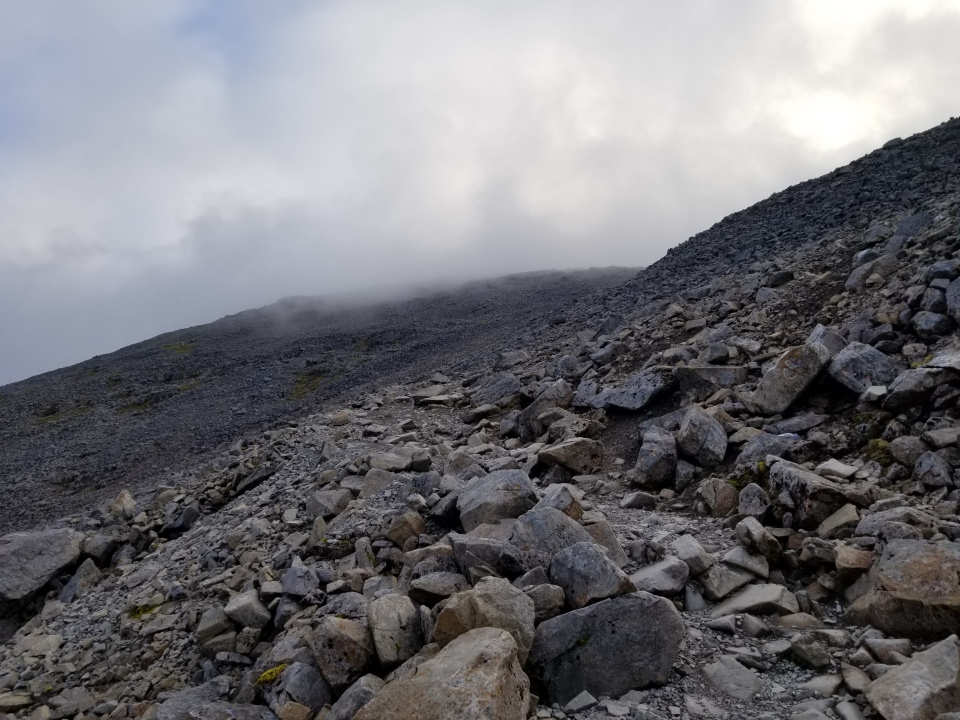 Spooky at the top 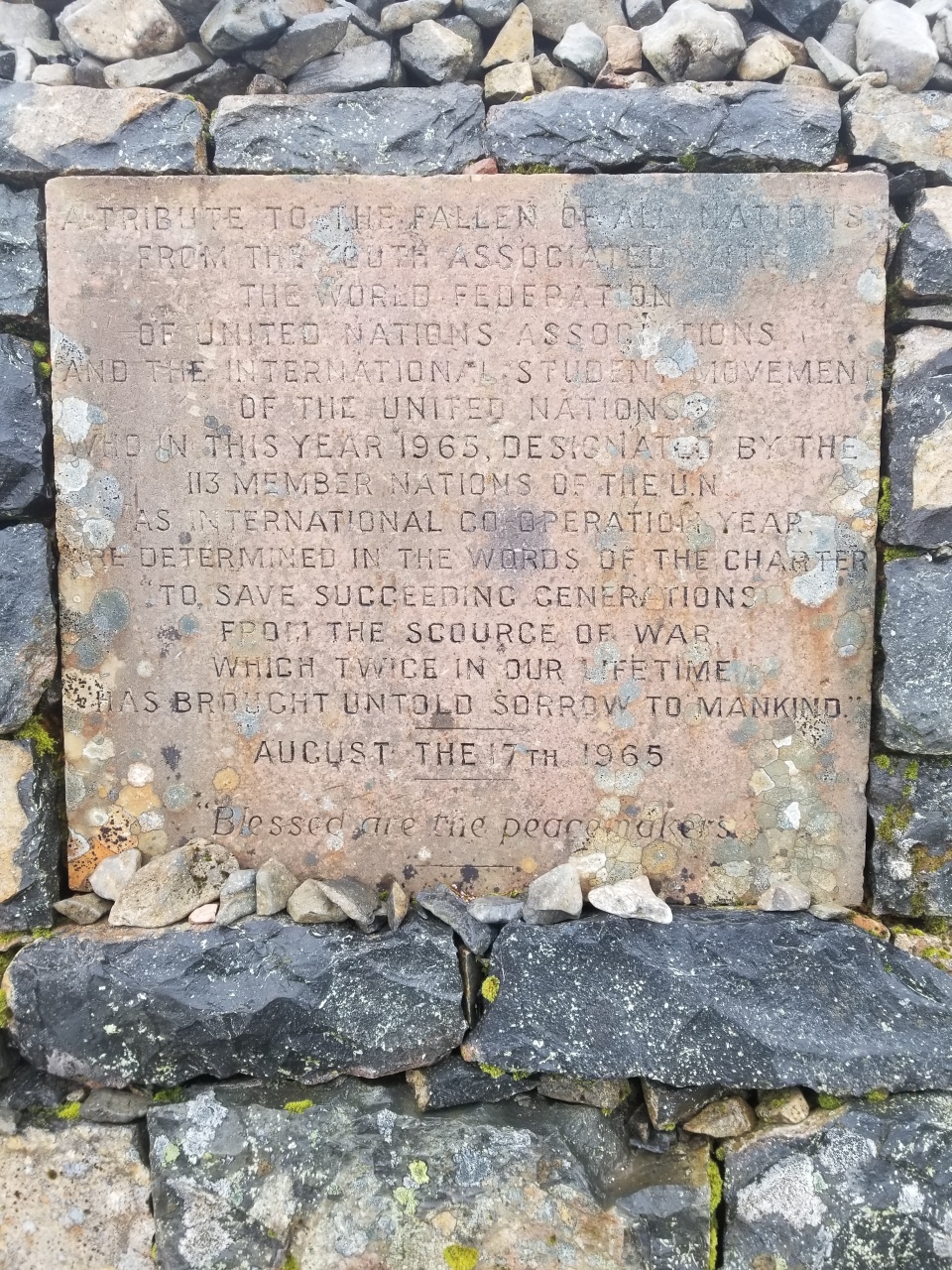 Looking into the foggy abyss

On top of the highest Munro

A local doctor, Jimmy Wild, won it for the 9th year in a row; 1 hour and 24 minutes up and down

A wee dram of rum